Coronation has grown assets under management remarkably over the past 3 years, but their share price has risen faster, valuing the company at more than 6% of their AUM. Placing Investec’s investment and wealth management businesses on a similar multiple would value them at over R100 a share.

Successful asset management businesses can be very attractive investments. They are capital light businesses that are able to generate very attractive returns on equity once they reach a sufficient scale. Furthermore, the switching costs of moving assets to a new manager are sufficient to retain clients and create an economic moat for large established players. Two of South Africa’s largest asset managers are listed on the JSE, Coronation and Investec, although Investec is a subsidiary of the listed Investec Limited group which also includes the Wealth and Investment and Specialist Banking operations. Coronation’s share price has enjoyed an exceptional climb over the past 2 years, rising from a level of R28 per share in March 2012 to a high of above R95 per share. This values Coronation at a market capitalisation of over R32.5bn and with last reported assets under management (AUM) of R522bn this equates to a market capitalisation of 6.25% of AUM. 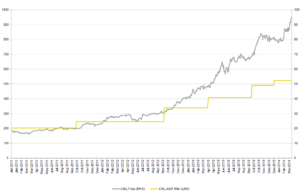 It is interesting to compare this valuation metric of Coronation to that of Investec. Because Investec’s asset management and wealth management businesses are part of a larger group it is not possible to determine the Market cap to AUM multiple that they trade on, but it is possible to place these businesses on the same multiple as Coronation and see how that would value those parts of the business.

In their latest results Investec reports that their asset management business manages 66.2bn GBP of Assets. Converting to Rand at an exchange rate of 17.7 Rand to the Pound and using the same rating as Coronation values Investec Asset Management at R73bn, this means that the 85% of the business that Investec owns is worth R62.2bn which amounts to about R69.8 per share of Investec’s current R77.5 share price. Performing the same analysis on the approximately R28bn GBP of assets under direct management in the Wealth and Investments division gives a value of about R35.5 per share.

Adding these together gives a value of about R104 per share for Investec’s investment management operations if they were afforded the same market cap to AUM multiple as Coronation. If we were to value the specialist bank division at a 1x price to book multiple this would take the valuation for Investec to over R155 per share.

Of course this is one perspective on these two shares and this piece of analysis rests on the assumption that it is appropriate to value Investec Asset Management on a similar Market Cap to AUM ratio as Coronation. An argument against this could be that Coronation is a more profitable business and therefore demands a higher valuation for its assets under management. One way to account for this is to use a traditional Price Earnings (PE) multiple for this comparison. Investec Asset Management and Wealth and Investments reported combined operation profit of 103m GBP for the six months to end September 2013. Annualising, taking tax and minorities into account, and then placing these businesses on the 21.5x trailing PE that Coronation is trading at gives a value of about R65 per share for these businesses combined. This is significantly lower than the R104 we calculated earlier, but is still a significant portion of the current share price. This would imply that the specialist bank is worth about R12.50 per share which we estimate equates to a price to book ratio of about 0.24x.

This analysis is quite simple, it relies on one or two simple measures of value and is very sensitive to assumptions and we are not suggesting that Investec’s investment management businesses should be valued at 6% of AUM. But this simple analysis does seem to suggest that the current market price of Coronation is pricing in continued exceptional performance from the business and its investment products, while Investec’s current market price allows much more room for error. We have had some of our client’s funds invested in Coronation over the past 3 years but at the current share price we are happy to haven taken profits and see more value in Investec.

Posted on April 17, 2014 by Dormant For security
Categories: blog